Not For Resale: REVIEW: The Mekano Set - Maastricht EP

Not For Resale: REVIEW: The Mekano Set - Maastricht EP: "The Mekano Set and me go way back, to the dawn of NFR (Check out this t-shirt in the photo below!...if you can make it out....), but Milk ha..."

The Mekano Set
Posted by Mekanoset at 12:08 pm Links to this post

Posted by Milk (The Mekano Set) at 6:33 pm Links to this post

The plan was to follow up the filthy angst-riddled industrial-strenght fuzz fest of Maastricht Circle EP with a more down-tempo, loved up affair. Sort of Barry White on Ketamine. Even though we think K is for vacuous middle class de-voids, and Barry White is for sexual predators with moustaches and slip-on shoes. Stick around, it gets funnier.

But sticking to a plan is a rarity amongst all but the most human. And there's been such a really great response to the demos of songs we were working on in December (more angst-riddled filth). That gave us the impetus to get them finished rather than spend weeks performing exploratory surgery on the frequencies of each drum in turn.

The fact that people actually paid for downloads (rather than waiting for some clammy Czechoslovakian charmer with a moustache and slip-on shoes to host short-wave radio quality text files of them on a Celeron PC tower wired up to a car battery in the back of a van).

So while you're waiting for the Vass Man to siphon off enough diesel from a nearby Renault to fire up his Server, there are now 3 new songs up on bandcamp.

This is a real point though. Mainstream bands have the luxury of corporate funding. They also have to deal with the leveling effect of file-sharing. File-sharing is nothing new. Genuinely independant acts and labels haven't been effected in the same way.

The problem is that the industry has always been behind the times in terms of what is actually going on in the world, particularly in youth culture and the innovations of adults who haven't given up to money-greed.

Before mp3's and file sharing, people had access to blank CD's. Before that, it was cassettes. Hell, people were copying vinyl back in the day.

Of course, food actually does grow on trees. Amazing isn't it? But 99% of the time somebody owns the tree. Some people even earn a living by tending to the trees, nurturing and supporting them. Gathering what are known as 'crop'. Crazy yeah?!

I was only vaguely aware of the way that a certain song could put you in a very specific mood.

We're holding on to the final mixes of the more brighter, less spite-fuelled songs like Hahaharem and Simm for the moment. Not to say that this current batch is entirely about treading water via people's faces:

In one song, there's even a guitar part that actually bares more than a passing resemblance to the sound of a real-life electric guitar. Lead-guitar even. It's our Massive Attack meets Iron Maiden song. And no, I'm not being at all ironic when I say that.

The truth is, all along what I've been trying to do is combine the 'Tripple Lead Attack' blues-metal of late 80's 'Maiden, with the melody-free, 3 am valium groove of recent Massive Attack albums.

We previously posted demos of these songs on soundcloud (Glass Keys, Throwing Shapes and I Hate Your Band / SlowTime). If they do alright on bandcamp we'll see about getting them on Spotify etc. If not, we'll deny everything and claim that we spent the whole time secretly finishing off the less nasty songs.

Looking at video footage this weekend. Wanted to go see Blindness playing in Brixton but I'd been up til dawn the previous night working on a new idea (since I was reminded it's been a long time since we did any slow beats, or any fast beats for that matter). So time to play with some different tempos don't you know. Also my hair looks stupid.

This post is dedicated to Milan Vasilev. My Czech fiend who passed away in December. One of the few genuine people I've met since living down here. I won't fowgedaboudit, Milo

Posted by Milk (The Mekano Set) at 6:03 pm Links to this post

THERE'S NO NAME FOR IT YET 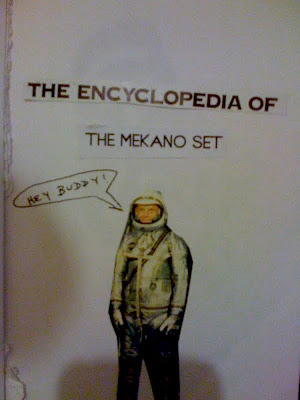 So, we survived. It's been a tough year, but we are well aware that 2010 was the most productive time we've ever had. We've never gigged so consistently (we managed to do at least one event every month - no mean feat for an unconventional band with no manager, no publicist, no booking agent, no street team...).

"My whole life flashed before my eyes. I realized that I'd spent way too much time dying my hair red, with a slice of cold pizza in one hand and a San Miguel in the other. I thought it would be all about kick drums and girls with Louise Brooks haircuts."

It also feels like we've made real progress in terms of production and arrangement and being more able to create the sounds we want to hear (a band doesn't have to worry about the details usually, but our thing is so much about the sound it would not be fun or helpful to involve a real producer). The EP was ready just in time for the end of the year. 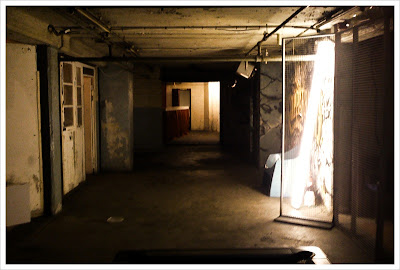 We've increasingly operated smoothly without the aid of guest musicians. So it seemed natural to keep the EP in-house. There are a couple of unreleased tracks with Sahara vocals that we're all really pleased with, but we're hanging on to them for the time being.

Somebody emailed me last week to say they'd bought a version of a Reel to Real CD in a shop that had about 9 tracks on it (the 'missing first album' by me and Beth - check with us before you purchase anything like that as some are only demo versions and not as good as later mixes - at least to our ears).

Certain people assumed that we would continue to work with guest vocalists for the majority of songs. Sahara travels a lot and isn't available for as many sessions as we'd like. There was pressure to find "another fit female singer" that I found really pretty offensive. And nobody involved backed me up on that.

"Sometimes it feels like there's been a return to the 'Carry On' / saucy postcard sexism mentality to Britain - minus the gags. And without Kenneth Williams. Or Charles Hawtrey." 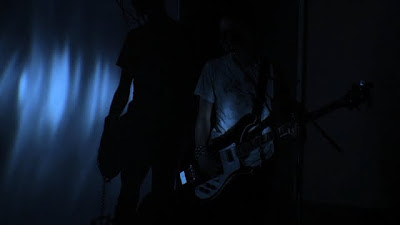 Anyway, we did a couple of gigs. Just me and Lee and a smoke machine. It was make or break time as far as I was concerned.

So we took our time to get into the groove. And people that have seen us in all our guises got to hear what we are really capable of. It's true that I've been hiding for a long time. I guess people didn't expect that I could, or would even want to, hold down a bassline, or sing, rather than bellow and noodle away in the background.

So while we're always open to collaborations, there's no intention to get a full-time vocalist in. It was always my intention to not replace Beth with another female vocalist.

Sahara was a friend who offered real moral support when I didn't want to carry on, and didn't know where to go. She contributed so much to the last album, but she is fundamentally a bass player not a vocalist, and neither of us was happy with the pressure she was placed under to become a front-person.

We're not a rock band. This is about sound, not theatrics (not that we have a problem with the visual / antics / theatrics of bands - we just don't have the time and energy to embellish on that level). 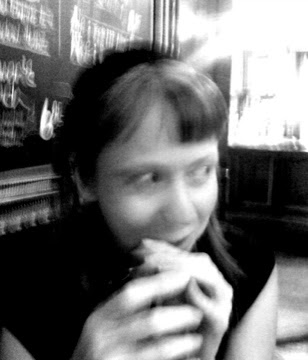 As Abstinence & Sensibility, working with Jo has given me the chance to explore live-looping and improvizing again. It also gave me the confidence to stop hiding behind guest singers all the time and deploy the secret weapon (tiny guy, big voice). 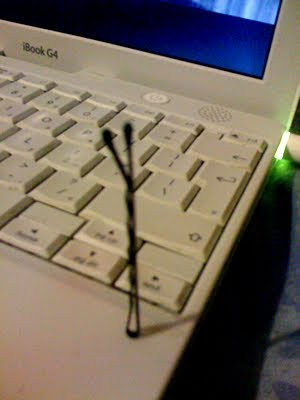 It was a real thrill to play with some really great bands too.

Anarchistwood transcend the conventions of punk rock, bypass the macho bullshit closeted attitude and turn it into a celebration.

Blindness have taken the grit and grind of NIN and given it more energy and urgency than the Les Paul wielding jocks ever did. Deb Smith's pared-down guitar chops and a spitefully lo-fi drum machine provide the perfect foil for Beth to stomp around in.

Little Specks of Blood have taken the rotting guts of electronic music and welded it to metal guitars, quirky loopage and wiley feline energy, making it seem both complex and effortless at the same time. 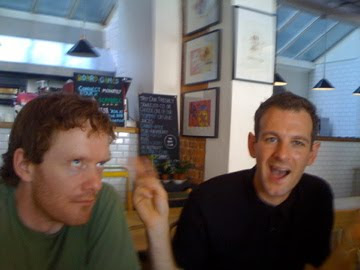 In 2011 we'll be working on some more unusual projects: physical copies of Maastricht Circle EP will come in a book.

We'll also be seeing how much footage we can cram onto a single DVD. The book Letters From Imercia will hopefully see the light of day.

And I suppose you've got to have at least one list haven't you?

5 songs on Repeat this year:

1. Pap Smear - Crystal Castles (still a sucker for a female vocal)
2. Someone Great - LCD Soundsystem (from 2007 but the vibe still works)
3. Wearing My Rolex - Wiley (from a couple of years ago but we dig the self-depreciating humour and well, the kick drum...)
4. Benga / Katy B: Man on a Mission / Katy B on a Mission (not new, and pretty lite, but it reminded me how much Dubstep was free from conventional 60's song structure. Inevitably people are going to start welding songs onto it's shifting grooves: but the 'song' still doesn't have to fit the convention)
5. Hideaway - Playgroup (an old down-tempo groove I heard Gilles Peterson play when I was a kid. Taken me all year to find it). 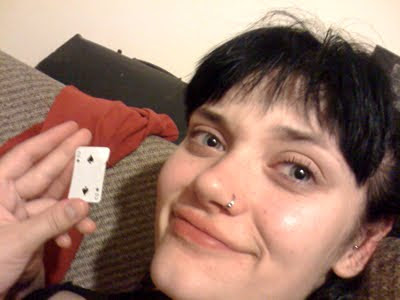 So, if you weren't around over the holiday, the new EP became available just before Christmoose and is available in high quality formats via Bandcamp, cheap and cheerful mp3's via Emusic and iTunes. The tracks are also available on Spotify. 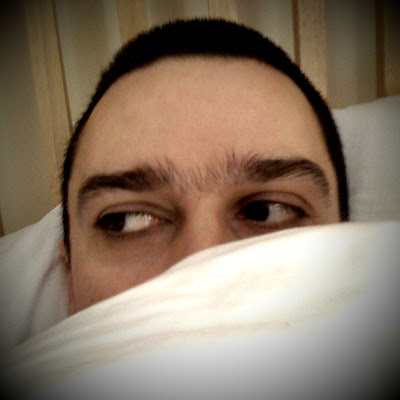 The Mekano Set
Posted by Mekanoset at 2:34 pm Links to this post