You may all know me as the cosmopolitan, jet-setting, affair-having, sexual adventurer-warrior that I play in everyday life, but behind the facade lies a human being that actually cares about her work. ...well, a little at least.

I saw a pair of shoes online today. The six inch heels were made of some sort of petrol coloured metal and the rest of the shoe was floaty-white and feathery (with actual feathers stuck to it). Needless to say I ordered three pairs, one for me, one as a backup and one just in case.

I might run out of money for this month.

Anyway, I think these shoes are a great metaphor for how I work, and how I think.


I'm also planning my next excursion (not: holiday!) in order to find the most exotic and interesting sound samples that the band I represent (the Mekno SEt) can use on their next album which is due in 2020.
I've been trying to collect sound samples around where I live in the good old U of K, but so far the bins I've been recording have not turned up much apart from a slight crackling from the odd freshly disposed-of crisp packet or two. I like to nod enthusiastically and act as if I totally get it whenever I meet up with the band, but to be completely honest I'm not sure what they meant when they said they were looking for a "behind-the-bins sort of sound". I'm going out again this afternoon to buy guacamole and might see if the clothes recycling bin behind Tesco's turns up anything more useful than what I have so far. 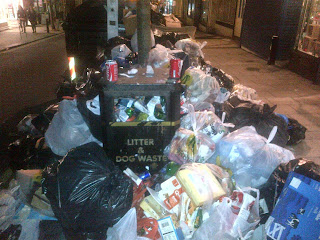 The last time I spoke to my cousin to try and clarify the matter, all she said was "Sin, I've got sublimation coming out of my ears, I can't really talk right now" and hung up the phone. And they tell me I'm the weird one. Although on second thought, it was 4 a.m. so she may have been anywhere between actually asleep/high/drunk/sleep-deprived/severely annoyed that I woke her up/still mad at me for that time I was convinced she was wearing a wig made from my hair.

The point is, I'm a very busy woman and I'm worried that I'm wasting my time on recording stuff they won't be able to use, not even as the background noise you give to Milk which then gets mixed so low that it might as well not be there at all (but he still insists it adds to the timbre of the song, whatever that means).

I have my own issues thank you very much.

But yeah, they're gonna do music and apparently that is all that even matters.

Posted by Sin Tucker at 8:29 pm Links to this post