Cheers, ahoy and shut up! to everyone who joined us in Brighton on Saturday. It was a blast. We only planned to DJ, but ended up dusting off our guitars and beats and even tried out a couple of new tunes for the first time in a while.

And look at Lee in his fitting tribute to those of you that were at Carter USM instead: 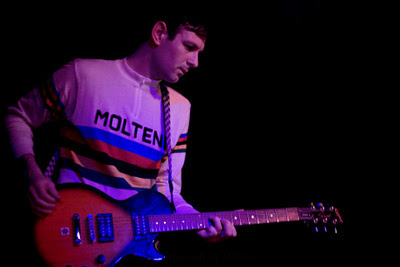 
From what I can remember we played...

Oh, and here's a link to the 'intro' to our live set (minus Lee's improvized drum-machine-through-a-marshall-amp-beat): http://themekanoset.tumblr.com/post/13112772097/this-was-the-intro-we-used-for-saturdays-gig

Special thanks to Mr Hoof, Allan from Little Specks of Blood Lust Blood, and BeatnikSoup and MsDee for taking some snaps.

Right, off for a rant on http://twitter.com/mekanoset

To contact The Mekano Set / Milk regarding releases / songs: mysteriouspackages@mekanoset.net