Songs That Shaped My Brain 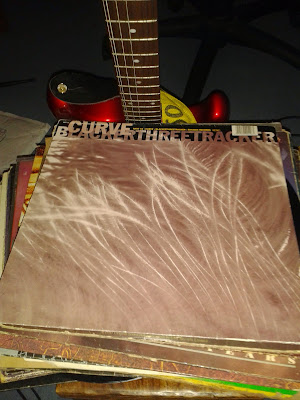 I got tagged to list some music that I like and I got carried away. I needed the distraction. Doing things like this remind me that I do have not entirely obscure influences and I am not actually operating in the dark:

Leftfield + Toni Halliday : Original. Leftfield were a House / Trip-Hop act (but) this and Open Up with Johnny Rotten confirmed their Alt credentials. Electronic / dance music was the music of people from all kinds of scenes. Early raves and clubs didn't have a uniform. They certainly weren't the kind of places you'd find the white trainer brigades and you'd see everyone from older hippie types and Madchester heads to Goths and Grebos and everything in-between. It's a shame that things have become so divided again but that's the way the old boys network want it. Divide and rule.

I'm pretty sure this is how I got into Pil and then the whole Post-Punk thing. Those two singles made me see that dance music wasn't just about clean, laminated safe sounds. Their work, along with people like Underworld and Autechre had that edgy, dark side that is the secret ingredient to a good tune. If something is too positive, or too negative, it's never going to feel nourishing enough. I still have this on vinyl (covered in bleach and Directions Poppy Red) so I'm claiming it as an 'album'.

Cocteau Twins: Otherness e.p. Again, on really heavyweight vinyl so Album. This helped me onto the path of using guitars as sound-source, instead of synths. This is a really dubby ambient re-mix set by the Seefeel bloke. Cocteau's Simon Raymond has to be one of the most underrated musicians of the 80s and 90s. Playing bass with an actual bassy tone at a time when most were opting for macho twang and plodding route notes, he’s also a great pianist and guitarist, and got a lot more out of those old 60s surf 6 string basses than The Cure or Joy Division ever did.

Kate Bush: The Dreaming Because my parents had it and growing up listening to this introduced me to the idea that it's not just your ears that 'listen' to music. Because shivers down the spine and hairs on end. Seeing her live was the single most moving gig I've ever been to. And the spooky-pop vibe. The emphasis on percussion, drone notes and groove. Big influence.

Curve: Cherry I heard this when I was still in school. Dean Garcia's from-the-heart mix of grimy growling bass and dirty beats and Debbie Smith's gritty-funky non-macho guitar woke me up on every level. They also looked effortlessly cool. I had never had any interest at all in making / playing music until I heard about 30 seconds of Clipped on some crappy TV show. I'd always seen guitar music as too macho and dance music too middle-class and this helped me cast off a load of useless snobbery.

Techno Animal: Re-Entry: At a time when I totally did not want to hear anything even vaguely melodic, this confirmed for me idea that beat + noise + drone = more than enough. It also made me realize that it doesn't matter what the instrumentation is, if the end result works, it's doesn't matter whether it's guitars, synths, samples or the god-like sound of Jon Hassell's trumpet.

I've followed Bug Man's work ever since. I've seen / heard him go from strength to strength in the pursuit of the perfect slice of noise and groove. Heavyweight music without the machismo, electronic but massively dirty and organic. I've been pursuing that ever since.

Kind Migas Sound: Aroo: This and their live shows at the time pretty much defined everything that I wanted to do with The Mekano Set: immersive sound, lights aimed at the crowd, a wall of sound and smoke. Pure bliss-out noise with solid beats. Playing the mix not just playing a vintage bloody Fender guitar. K Martin laying out vast yet intimate sonic spaces for Kiki and Roger to explore with an intoxicating cocktail of emotions, uncertainties, fears and longings. Awesome.

Talk Talk: The Colour of Spring but any and all of their albums. The voice. The voice! Is he shouting or is he whispering??? The way that the band was a drummer and a bassist without a guitarist meant so much power and room were devoted to the beats and the melodic bass. The zero-tolerance to industry / journalist bullshit, the no compromise attitude and the fact that they were obviously influenced by all kinds of music made me realize that that tends to be what real musicians are about.

Hawkwind Hall of The Mountain Grill: I was lucky to find this when I was about 10 - it brought down a lot of the barriers of ignorance and fear that I was growing up around. This was rock but also opened my ears to experimentation, drone, groove, electronics, heavy bass end, psychedelics, real punk attitude, singing in working class British accents, ignoring preconceived genres and just mapping out your own space.

Scorn: Evanescence: This came out four years before Massive Attack started exploring darker, minimalistic, Post-Punk inspired Trip-Hop on Mezzanine. Again, a mix of great looped / programmed / sampled beats; heavyweight bassy bass and guitars that totally push the barriers of what a guitar can do. On heavy vinyl too.

The Sisters of Mercy: Floodlands: my Dad had this on cassette and he'd play this, Bryan Ferry and Ian Dury on repeat whilst we drove around the wilds of Wales as kids. Deep, almost crooning, edgy vocal styles... But I forgot all about it until years later me and my friend met a bunch of Indie Techno Goth girls and introduced us to the world of Alternative culture (we were not alone!). The minimalism, the 'spooky pop' vibe, the baritone vocal, melodic bass and massive drum-machine grooves must have made their mark. Spooky Pop music is the best pop music. Weirdly I can't get my head round any of their other stuff - it all sounds too much like drug-fueled Metal.

Magazine: Play: My long time musical collaborator Ade B (Mutate / Stray Dog City) introduced me to the world of Post-Punk properly at a time when I had become sick to death of guitar music. The guitar is there and it rocks, but it also has an exotic, angular edge and works with the other instruments to create the groove. Barry Adamson's bass is just incredible. No bass player has ever had a better tone to my ears.

Tricky: Maxinquay: The voices. It's all about the voices. Also, as a massively commercial album  at the time it was obvious that Tricky and Martine were freaks like us. I heard this at a time when there didn't seem to be any music that spoke to me or wasn't trying to reduce me while listening to it. It was soothing. The world is fucked, let's fall asleep in a space-ship and watch it on TV. You could totally hear Tom Waits, Indie guitar music, real Hip-Hop and The Specials in their sound and attitude. I loved the fact that Tricky was tough but in a vulnerable way and he seemed totally into embracing his feminine side. Martine's voice is a kind of medicine.

Climate of Hunter by Scott Walker: another one I was lucky to take on board when still a kid. It's massively stripped back and only really goes to the same couple of places over and over again. It's just that voice, a pounding beat, some nicely understated fretless bass, droning synths laying low and a hint of crashing guitar here and there to beak the ice. There's something wonderfully post-apocalyptic about the whole flavour of this album. This, and the first three songs on Nite Flights by The Walker Brothers reveal Walker as someone who was more than able to transcend his times. He's gone on to do some of the most extreme, adventurous music of someone in his or anyone's position. They weren't brothers you know? The emptiness made a big impression on me. I don't have the guts to do anything half as spacious.


Posted by Mekanoset at 1:59 pm Links to this post